Headline US inflation (the personal consumption expenditure deflator, PCE), reached 2% in the year to March, the first time the ‘big’ number was 2 since October 2012. The core PCE deflator was 1.9%, the highest in a year. Unsurprisingly, markets expect the Fed to continue to raise interest rates throughout 2018 and into 2019. So too, judging by the statement from the 1-2 May FOMC meeting, does the Fed.

With regards to other central banks, the picture is less clear. As we have previously noted, monetary data is easing. Other leading indicators, notably in the euro area, but elsewhere too, are pointing to a slowdown in economic activity in late 2018. In addition, inflation is generally still below target in most developed markets (with the exception of the UK, where it is above target but heading down). This has given rise to a view that central banks are moving away from the modest hawkishness we have seen over the past six months or so.

However, absent a significant downturn, this still seems unlikely. What leading indicators show is that activity will continue to expand, albeit at a slower pace. In fact, the the latest OECD numbers, updated in March this year, still forecast above-trend growth in most major developed markets in both 2018 and 2019. The exceptions are the UK, where growth is forecast to be below-trend; and Korea and Sweden, where trend-growth is forecast (above-trend in Sweden in 2018, slowing to trend next year). This is roughly the same as The Economist’s monthly poll of forecasters from April. Above-trend growth means that negative output gaps will continue to narrow (or, in the cases of Germany, the Netherlands, Sweden, the US and the EA, positive output gaps will widen further.) 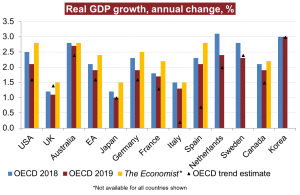 The likelihood is therefore that inflation will resume its erratic upward crawl that has been in place for much of the past two years. That in itself argues for caution before central banks shift gear. 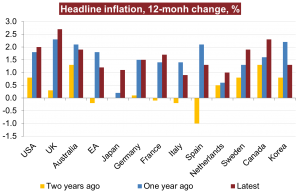 There are other reasons to expect less dovishness from central banks. For one thing, as just noted, although inflation is erratic, on the whole, both headline and underlying inflation is trending gently upwards when seen over a longer perspective.

In addition, one should not underestimate the desire of central banks to exit from unconventional monetary policies. Central bankers have repeatedly made it clear that these are temporary measures, due to be reversed as soon as possible. (They are wrong, in the sense that many of the instruments they have used will be used again, but that is less relevant in the current situation.) This is partly because they hope to revert to a situation where the policy interest rate is once again they key, if not the only instrument they use. But also for another reason. That is the concern that the current expansion, however weak it is, is already overdue for a correction. (This is probably also wrong; absent a pick-up in inflation or an involuntary build-up of inventories, there is no reason for an expansion to peter out.) When this happens, central banks don’t want to be left without ammunition – and by this, they mean, the ability to cut interest rates.

If they cannot draw down their stimulus and begin to normalise moneetary policy when the going is good, when will they ever be able to do it? The current signs of weakness are likely to to reinforce this attitude, assuming, as we do, that the weakness will be short-lived and minimal. In other words, having had a brush with a slowdown, central banks will at the first signs of sustained strength, feel even greater urgency to expedite the return to normalcy.

So, although caution remains the order of the day, that caution also is one of continuing to aim for an exit from unconventional measures, not for extending them.

And now, for something completely different:

As some of you already know, I have for some time been writing a novel. I am pleased to say that this is now published. It is an historical novel, called An English Revenge, and takes place in the 11th Century in England and in the Byzantine Empire. Read more about it here.