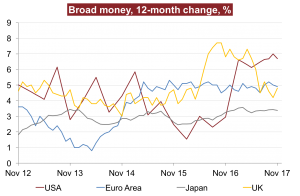 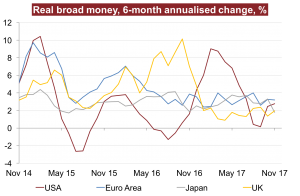 The appropriate (nominal) broad money growth rate for each country varies, depending as it does on trend growth and current as well as desired inflation and the trend of the velocity of money. In the case of the USA, this adds up to about 5-7% per annum; for the EA to about 4-6%; and so on. Importantly, in spite of recent weaker data, therefore, broad money growth in the large advanced economies is currently at rates implying output growth at or above trend in 2018.

That is of course good. But with regards to asset prices, some further detail is important. The bulk of money (more than 90%) in any advanced economy consists of bank accounts held by the non-bank private sector. These can be divided into deposits held by households; by non-financial companies; and by other financial institutions/companies (OFCs). Tim Congdon has repeatedly shown that money holdings by households and by non-financial companies tend to be relatively stable.[1] By contrast, OFC money holdings not only vary much more, but also bear a closer relationship with asset prices. This is partly because OFCs tend to want to or have to hold most of their assets in something else than cash and usually have small desired cash/asset ratios.

Central banks don’t always publish data on the breakdown of deposits by holder. The Federal Reserve only does so quarterly, in the Financial Flows data, most recently Q3 2017, (although there is a helpful weekly and monthly series, see below), while the ECB and the BoE do so on a monthly basis. The BoJ, by contrast, only reports household and corporate (financial and non-financial combined) deposits. But this still gives us data for three of the four advanced economy large financial centres. 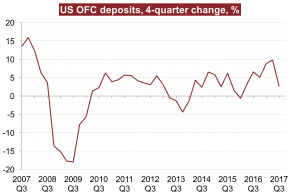 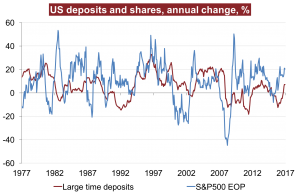 For the US, although the data is erratic and the very latest quarter shows a weaker OFC deposit growth rate, the medium-term trend is nevertheless still gently, if erratically, up. Moreover, there is another leading monetary indicator of US asset prices. This is large (i.e., in excess of $100,000) savings deposits. These are not included in the Fed’s broadest money measure M2, although they used to be part of M3. However, it stands to reason that the actions and deposits of households and companies that can afford to have in excess of $100,000 in a bank account, are likely to be more relevant for asset prices than holdings of those who cannot command such sums. As it happens, data on large time and savings deposits is published weekly and monthly.  Recent figures show another surge in large time and savings deposits, implying further support for US equity prices.

Euro Area data is much less positive, with the deposits of both insurance companies and OFIs still contracting on a twelve-month basis. In both cases, there has been something of an upturn since the spring of 2017. However, if the message from US money trends for asset price developments in 2018 is relatively buoyant, in the EA, the message is quite pessimistic. As against, that, the continuation of ECB asset purchases (QE) until at least September, should act to underpin asset prices.

In the UK, finally, although OFC deposits growth has trended down since April, more recent data show a pick-up in the very last few months, which may imply a trend change. Overall, however, the monetary message for UK asset prices is also at best somewhat subdued. 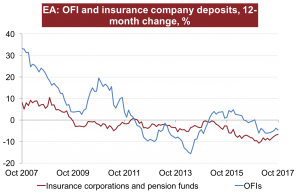 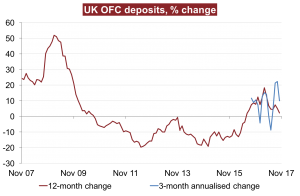 Hence, the monetary message for asset prices in 2018 is some continued support, but less than in 2017. The question is now whether there is anything that could offset this in 2018? Leaving aside the ever-present possibility of a Black Swan event, there seem to be four possible threats:

To repeat, these are the threats, the downside risks. The overall monetary message for asset prices in 2018 remains moderately positive. Moreover (and to quote Old Turkey, the character from Reminiscences of a Stock Market Operator), “After all, this is a bull market.” These tend to run on, powered by their own momentum, until something suddenly snaps.