Our core team, below, is complemented by a network of associates whose expertise we draw upon and whose articles we also publish from time to time. Gabriel Stein is an independent macroeconomic commentator and forecaster on monetary and central banking matters.

After graduating from Stockholm School of Economics in 1980, Gabriel worked at the Israeli Ministry of Finance international relations department. From 1982 to 1990 he ran Stein Brothers, a public affairs and economics research consultancy, first in Stockholm and (from 1990) in London.

From 1991 to 2012 he was chief international economist of Lombard Street Research, where he helped set up the company’s world service. During this time, he wrote and commented on all major world economies. From 2012 to 2014 he ran his own macroeconomic forecasting consultancy, Stein Brothers (UK). In 2014, Stein Brothers (UK) was acquired by Oxford Economics, and he became their Director, Asset Management Services. From October 2016 to August 2017, he was Managing Director, Developed Markets Research at 4Cast RGE.

He is a senior fellow of the Adam Smith Institute. From 2013 to 2016 he was visiting professor in the Department of Economics at Royal Holloway University of London; and from 2013 to 2016 he was senior non-resident fellow at the Chongyang Institute for Financial Studies, Renmin University, Beijing. Since 2018, he is on the Advisory Council of the University of Buckingham International Institute for Monetary Research. He regularly appears on television and at conferences.

Gabriel has an MA in military history from Buckingham University. His first novel, An English Revenge, was published in January 2018.

John Nugée is an independent commentator on financial, economic and political issues, with an extensive background in the official sector. He writes regularly for the financial press.

The major part of his career was spent at the Bank of England where his last post was as Chief Manager of the Reserves. He also worked at the Hong Kong Monetary Authority, where he was Executive Director in charge of Reserves Management, and acted as a UK director at the European Investment Bank and European Investment Fund and a technical expert on markets at the European Commission.

From 2000 to 2013 he worked at State Street Global Advisors (SSgA), the asset management division of State Street Corporation, latterly as Senior Managing Director. He founded and ran SSgA’s Official Institutions Group, responsible for overseeing the firm’s interaction with its official sector clients.

John is also a Director of the Official Monetary and Financial Institutions Forum (OMFIF), an Associate of Llewellyn Consulting, and an Adviser to the World Gold Council and the Open Retirement Club. He is also an active member of the Worshipful Company of Weavers, the oldest of the City of London’s guilds and livery companies, and a trustee of The Nugee Foundation. 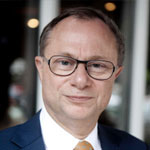 Peter Stein graduated from The Stockholm School of Economics 1976 and did doctoral studies at The Stockholm School of Economics and the University of Stockholm. He taught applied microeconomics at The Stockholm School of Economics and has since 2013 been teaching the Economics of Africa at The Royal Institute of Technology in Stockholm. In 1991 he became CEO of Stein Brothers AB in Sweden. An acclaimed expert on the economies of Sub-Saharan Africa, Peter has been a consultant to a number of large Blue-Chip companies in Sweden, to the OECD and The International Chamber of Commerce as well as to three Swedish government commissions. He is a frequent commentator in Swedish and international media. Peter is a member of Tel Aviv University Board of Governors, member of The Mont Pelerin Society and has been awarded Paul Harris Fellow by Rotary International.